In this world of contrasts I struggle every day to make sense of the current system. One of the things which challenge my understanding is house demolitions, specifically self-demolitions.

On Sunday we finished our midterm orientation (a week of training, speeches, and visits) and I went with some colleagues to Masada, a touristic archaeological site at the Dead Sea, in Israel. Accordingly, we took the bus in West Jerusalem (the Israeli side of the city), took an Israeli bus (no Palestinian was sitting there – only Israeli civilians, some fully armed soldiers, foreign tourists, and we) and crossed the West Bank. It was a modern bus; it even had Wi-Fi. On our way out of Jerusalem we passed some settlements. In these weeks here I have learned quickly how to distinguish them from Palestinian villages. First, the houses have red roofs without water canisters on top, while all Palestinian houses need these in order to store water. Second, building cranes stick out pointing towards settlement expansion. These are not seen in Palestinian villages, as most of them are not allowed to build anything and if they do, it is without knowing how long these constructions will stand. I will come back to this later. Third, settlements are generally located on the top of the hill, a very strategic consideration.

On our small touristic trip we pass by several villages of Bedouins living alongside the road. Two weeks ago I went to one of these, Bir al Maskoob, because there had been several house demolitions. Bedouins used to be nomadic, but with time they settled down. Most of them live currently in small villages, yet as they are herders, they depend on access to land for their cattle to graze on. This land – not only the land of Bedouins but of all Palestinians – has been restricted and/or taken away through many means (which I will explain in another article) and is still an ongoing process.

Bedouin community of Bir al Maskoob, in the background the Ma’ale Adumim settlement.

Back to Bir al Maskoob. We arrived there – my colleague, our driver, who also served as our translator, and me. The small community lies next to the highway; directly on the other side we could see the Ma’ale Adumim settlement (which according to Wikipedia reached “city” status and has currently around 40’000 inhabitants) overlooking the highway and the several communities and villages. Through a small swaying path we walked towards the community. The houses are mainly a patchwork of corrugated iron, pieces of fabric, and plastic canvas. Goats and donkeys walked in between them, a small boy was driving a small bike. We talked to Hakim (pseudonym), the father of one family, who told us about the happening. His 15-year old son was standing next to him. They just lost their house, yet I saw no crying, no outrage, no strong emotions. It was not the first time that they were standing next to a scrap heap which some hours before had been their home. Every year they come to demolish his house, Hakim told us, referring to the Israeli authorities. This day they had come at 8:30 in the morning: two bulldozers, 10 military cars, and 50-60 soldiers. The balance: 9 houses and 3 animal shelters were razed to the ground. “The Israelis” had come without previous notice – Hakim and his family were surprised by bulldozers during breakfast.

Hakim and his family, like many other Palestinians, have the misfortune of living in Area C. This is a result of the Oslo II Agreement of 1995, which divided the West Bank in Areas A, B, and C. Area C is under full Israeli control and comprises the large majority (62%) of the West Bank. Area B (21%) is under civil Palestinian but military Israeli control, whereby only Area A (17% of the West Bank) is under full control of the Palestinian authority. To build or renovate anything in Area C, be it a second floor, a water well, a bird house, or solar panels, one needs approval from the Israeli authority. In the last years, less than 1% of the building requests have been approved. Accordingly, people are forced to build what under Israeli law is considered “illegally”.

Map of the West Bank, Area C is the dark brown area. Areas A and B are the light patches in the map. As can be seen, the territory controlled by the Palestinian Authority (Palestine) is not one unified territory, but rather several islands separated from each other.

The main Palestinian cities are located in Area A, yet most of the villages are in Area C. Tuqu’ is for instance a village where we go almost every day to monitor the school. This village is located 70% in Area C and 30% in Area B. The school lies next to a highway between two sharp curves. If somebody of you has been here, you will know how people drive – fast and dangerous. Children have to cross this street every day in order to go to school, a dangerous undertaking. The teachers painted a zebra-crossing in front of the school, yet as the street is located on Area C, the zebra-crossing has been removed. Now teachers come to school early enough to help children crossing with red “STOP” signs.

Even though Israeli law (which contradicts international law!) forbids building in Area C, Palestinians do it. Sometimes an animal shelter has to be built, a wall is so old that it has to be renewed, the roof has a hole and must be repaired, or a new floor must added as the family is expanding and the new families have to settle somewhere. These activities are prohibited. When the Israeli Administration becomes aware of this (e.g. by means of drones or helicopters), it hands out a so-called Work Stop Order. When the construction continues, a Demolition Order is filed. This means that the structure will be demolished sometime – maybe the next day, maybe in a week, but it can also happen in 10 years. Currently, there are around 7’000 pending demolition orders. As the mail system doesn’t work as in Switzerland, sometimes the written demolition order is put under a stone and the residents don’t find out about it until they find bulldozers waking them up. In East Jerusalem, people have to pay a demolition fine of some thousand USD. To avoid this, many persons choose the lesser of the two evils and decide to demolish their houses themselves, so called self-demolitions.

Luckily, Hakim didn’t have to pay for the demolition of his home. However, he had not gotten a demolition order. As his house has been demolished in the past years and he had rebuilt it again and again, no demolition order was issued after the first one. On the question what Hakim will do now, his answer was – of course – rebuilding it again. What else can he do? Yet until when will it last? Nobody knows. This pseudo-legal Israeli system doesn’t allow anybody, not even international institutions, to invest in the large majority (Area C) of the West Bank. A couple of weeks ago we accompanied the UN field officer to a village close to Bethlehem where solar panels had been built. Before, the villagers didn’t have electricity; now they have a fridge, can watch TV, and have light 24/7. When we visited them, however, one woman told us about a drone which has already flown over the village filming the panels. How long will the panels stay? At least 5 years, the UN officer told us, because they have a good lawyer. But sooner or later, also this village must count with a demolition.

In Bir al Maskoob we talked to Hakim and wrote down the data we needed to write an incident report. I feel terribly useless and frustrated; there is nothing we can do. I get closer to the women who are sitting with the children and start to chat with them. “It is cold and tonight it will rain” they tell me. “Inshallah it won’t” I responded. And with this in mind I step into our taxi and left the Bedouin community behind, ready to rebuild their houses once again.

Palestinian children trying to carry trees through a checkpoint before a peace demonstration, EAPPI, Mathieu, mars 2015

Palestinian children coming out from class being stopped by an Israeli soldier, avril 2015

Palestinian teenagers asking to remain on the sidewalk after a Settlers attack near the school, EAPPI, Mathieu, mars 2015

Palestinian children sitting in the shade of a tree next to a military car, EAPPI, Mathieu, avril 2015

Israeli children with their father before the Settlers’ tour, EAPPI, Mathieu, avril 2015 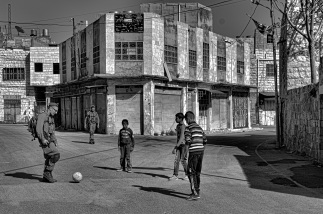 Palestinian children after crossing the checkpoint where 30 soldiers were standing, EAPPI, Mathieu, avril 2015